“Run the old stuff down, run it out, toss the weight of trash in your heart into the fire. December is the ruthless month. Pick up all your heartbreak and fling it out the window. Call everybody. Make peace and move on. Let those who wish to linger, let them linger and grieve. They will run and catch up to you if you move on. You are the leader when it comes to joy. Move forward towards joy.”

Exactly one week before my thirty-seventh birthday, I sat on a white stone bench on a terrace overlooking the Mediterranean Sea. I was alone. It was late November, two days after Thanksgiving, and off-season on Italy’s Amalfi Coast. I had found the spot earlier in the day when I’d been searching in vain for an open restaurant. I’d followed a sign advertising a (closed) café down a steep set of stairs, and discovered a garden terrace, flanked on all sides by deserted villas. It seemed too good to be true: such a beautiful place left unused, and still undiscovered by the gaggle of day-tripping tourists who had descended upon Positano that afternoon by bus.

But a few hours later, looking for a secluded spot to watch the sunset, I returned and found the terrace still vacant, save for one nosy tabby cat, who eyed me suspiciously before moving on. I settled in, opened the half bottle of Chianti I’d purchased at the Enoteca near the town square, and stared out across the water. I watched the descending sun bleed orange before it slipped behind a storm cloud (rain was forecast later that evening), and fixed my eyes on the island of Capri.

One week, I thought. One week I’d been in Italy, and one week ‘til I’d turn thirty-seven in London, before I headed back to see what life looked like in New York.

I’ve always treated birthdays like my own personal New Year, reflecting on where I’ve been and where I want to go, and this one was no different. Thirty-seven. I breathed in the sunset and the waves gently rippling on the surface of sapphire and jade green water, and thought about everything and nothing, all at the same time. 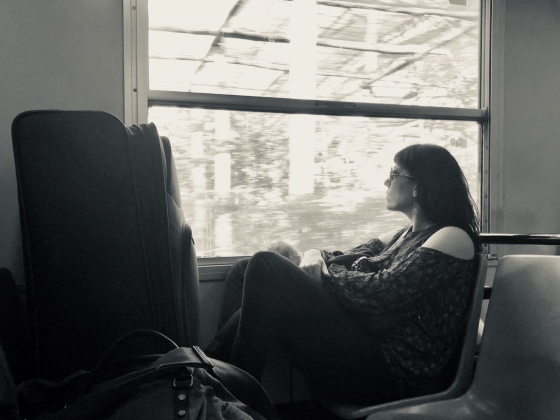 One week later, I rose early, drank a tall glass of water and a single shot of strong espresso, and boarded the Tube bound for Picadilly Circus. The plan was to begin my birthday by accompanying my friend Elena to her Saturday morning yoga class. I hadn’t taken a proper yoga class in years and found the prospect intimidating, but somewhere between the white-knuckle bus ride through the steep, winding highways of the Amalfi Coast and the Tube from Heathrow Airport, I promised myself that thirty-seven would be the year I did all the things that scared me. So, I paid my money, unrolled a yoga mat, and took a spot in the front row of class.

The instructor, a soft-spoken Polish man whose name “Rad,” was clearly short for something more difficult to pronounce, began class by asking us how our week had been.  As one woman released an audible sigh, Rad said, “Just observe your feelings and try not to judge them. Remember that the stories you tell yourself are just that: stories.”

Rad had just returned from a trip to Los Angeles. After class, I told him I lived there for many years, and had only recently decided to move to New York. Rad was an actor, and thought he might want to live in L.A., but after three years of traveling back and forth, he gave up his apartment in West Hollywood and returned to London. “Sometimes you have to go away to appreciate what you have,” he said.

I’ve gone away several times since I moved to New York. First to Montreal, then to a film festival in Miami, and now this latest trip, the longest one by far: eighteen days. If I’m feeling self-critical, I’ll tell you that my traveling is just a form of running away, refusing to settle in a new city where life is difficult. But if I’m feeling more compassionate, I’ll admit I’ve been navigating something profound, something I don’t yet fully understand. The best way I can describe it is that it feels like a revolution in my heart. It feels like finding forgiveness – mostly for myself – and letting go of old wounds. As Rad said that day in yoga class, the stories we tell ourselves are just that: stories. And I’m learning to transcend my old story and write a different one, one in which I’m strong enough to stand in my own skin, without apologies or regret.

Things happen in their own time. There’s a time to take bold and decisive action, and a time to be quiet and listen. And that’s largely what traveling has been about for me: listening. Observing my life from a distance, and gaining the perspective that only comes from meeting new people and discovering new places. From shaking up the every day.

I’m glad to be back in New York. I’m glad to be in the middle of the ruthless month. The trees have shed their leaves, the air is cold, and the days are short. But on the other side of all that’s dark is the promise of something new. A revolution. A rebirth. And a move towards joy.

16 thoughts on “The Ruthless Month.”