Where I Write: Cafe Surfas.

Are you lonesome tonight?

Do you miss me tonight?

Are you sorry we drifted apart?

I’m sitting at a wooden table near the edge of the expansive outdoor patio at Café Surfas, sipping a soy latte underneath the warm, amber glow of string lights, the late afternoon sun slipping low on the horizon, when suddenly an Elvis Presley ballad crackles across the overhead speakers, cutting through the damp January day. It stops me, as certain Elvis songs often do, because they remind me of my mother. She loved Elvis, and loved his sad songs most of all, something I realized only after she died. For a moment, I cease writing, thinking, remembering. And then I pick up my pen and begin again.

I haven’t been here in a while, even though it’s one of my favorite places to write in L.A. The café is part of the restaurant supply store Surfas, a go-to institution for chefs and L.A. foodies located in the heart of the Culver City Arts District. I like it for reasons both practical and personal. The parking is free (and abundant, a rarity in Angel City) and so is the Wi-Fi, and the spacious patio is rarely crowded. In fact, this afternoon, it’s just me and one of the regulars: a middle-aged, flannel shirt-wearing man with a serious demeanor and a giant black dog in tow. Every time I come here, without fail, he is also here, typing away on his laptop. In a world where so much is uncertain, I find the consistency comforting.

But the real reason I like Café Surfas is that – like so many of my favorite places in Los Angeles – I don’t feel at all like I’m in Los Angeles when I’m here. The interior of the café – with its black and white hexagonal tile floors, tall bistro tables, cheery yellow walls, vintage food posters and sweet, delectable treats – feels more like a cross between a hip New York City bakery and a provincial French bistro. Then add in the 1950s standards piped over the sound system and a wide-ranging menu of delicious, gourmet food, and writing here feels a bit like writing in the best, homiest kitchen ever.

And about the writing. At the moment, I’m in a bit of limbo. In December, I finished the most recent draft of my play, War Stories, and I’m currently pouring all my creative energy into getting ready for its February production. With opening night less than three weeks away, there is – as I’m sure you can imagine – a lot to do.

But still. I can’t not write. It may sound overly dramatic to say this, but these last few years, writing has been like oxygen for me. It has become the way that I think, the way that I work through my problems, the way that I articulate my feelings. And with so much going on, my busy brain spinning in a million different directions, I feel now more than ever the need to carve out time alone, just me and my journal.

So, during today’s writing session, I’m introspective. I resist the urge to spend my time making yet another to-do list and instead, I let my mind wander. I brainstorm ideas for essays I’d like to write, and places I’d like to publish them. I meditate on what’s next for Extra Dry Martini and the type of content I’d like to post here in the year ahead. I daydream a wish list for 2017, the year still young, the changes and challenges it will bring still unknown.

For an hour, I remain in this self-cocoon, head down, heart focused, shutting out all distractions. It feels like a luxury and a necessity, all at the same time. I stop at 5 o’clock, only because the café is closing and its employees are bustling around, getting ready to go home.

And it’s time for me to go home, too. As I drive east on Venice Boulevard, back toward my little bungalow on Cashio Street, I can’t help noticing that my busy brain isn’t quite as busy as it was an hour ago. Even with the espresso coursing through my veins, I feel calmer than I have in a while. And I vow to return, soon, and spend another hour with just me and my journal, an hour where the outside world is not allowed to intervene. 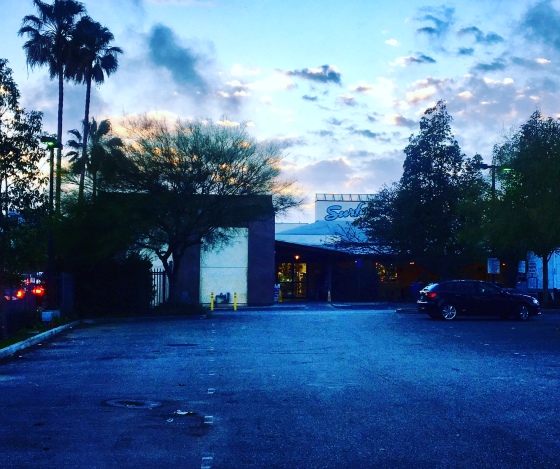