“We cannot simply sit and stare at our wounds forever.”

It took everything I had not to cry in the waiting room of the doctor’s office on west 58th Street. The tears had been threatening all morning. An hour before, I’d squeezed into the least crowded subway car I could find on the southbound number one train, only to discover the air conditioning was broken. Sandwiched between morning commuters, I gripped the grimy metal pole with one hand and lifted the hair off the back of my neck with the other, sweat gathering on my face and causing my glasses to slide down my nose. Once off the train, I checked my reflection in a store window: my right eye red and swollen, my skin an oil slick, my freshly flat-ironed hair already a frizzy mop from October humidity. As I walked down 58th Street, it started to rain. Perfect, I thought.

Once inside the doctor’s office – an impressive and well-heeled Manhattan ophthalmologist – I settled into a couch to fill out what felt like a never-ending stack of paperwork. “Everything’s going to be OK, Sar,” I told myself. “You’ll get rid of this infection and you’ll feel like yourself again.” An elderly man hobbled into the waiting room, part of his face covered in bandages, walking with the help of a cane, and I immediately felt ashamed. “So many people have it so much worse than you,” I thought. “Stop being a baby.”

I was escorted to a back room for tests. The doctor’s assistant was kind, picking up on my obvious nervous energy. I explained I’d already had a full eye exam in May with my eye doctor in California, and no, I did not need to have my pupils dilated. “I just really want to get rid of this infection,” I insisted. My voice sounded small.

“So, do you like, go back and forth between here and California?” he asked, as he held an instrument up to my eyes to check their pressure. “Umm, sort of,” I said. “I moved here a year ago, into a long-term sublet, but I’m not really sure how long I’m going to stay.” He nodded in understanding, and I knew I wasn’t alone in my sentiment. If there was a common theme among New Yorkers, it was – love or hate the city – they were always threatening to leave it.

The impressive ophthalmologist couldn’t have been more businesslike and less interested in putting me at ease. As she shined a light in my eyes and reported some numbers back to her assistant, I rambled on about my nearly three weeks long saga with ointments and urgent care. “Does that make sense?” I asked, desperate for reassurance. “Mmhmm” was all I received in return. 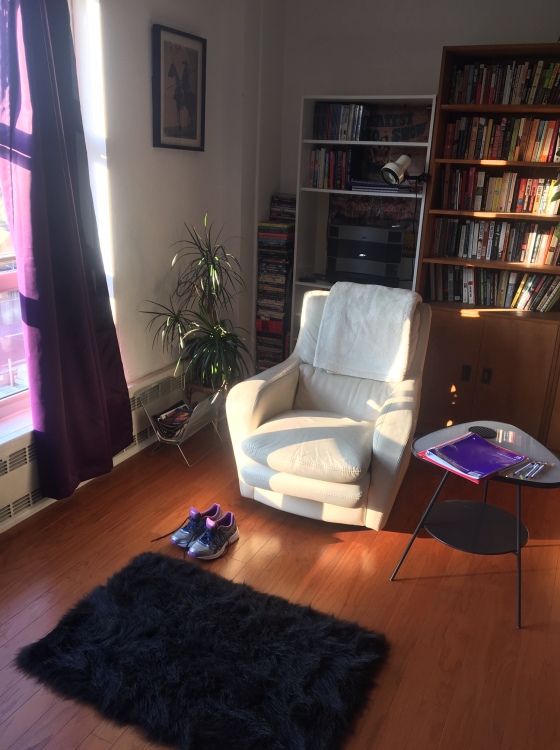 “I’m going to give you drops,” she told me, “and I want to see you again in one to two weeks. If the infection isn’t better, we’ll probably have to do an excision.” She described a procedure that sounded like something akin to torture and made a joke about an eye patch, but I had stopped listening; my body had already shifted into flight mode. In that moment, all I wanted was to get my prescription and get the hell out of there.

A few days later I took a train to Brooklyn to meet a friend for drinks. This friend is a brilliant filmmaker, a highly intuitive person, and – probably – a bit psychic. As I described the situation with my eye, she quickly shifted gears away from a medical conversation to a more spiritual one. “Why your eye?” she asked. “Is there something you’re not seeing? Or something you don’t want to see?”

Okay. Yes. My New York experience has been a study in averting my eyes, of procrastination and avoidance. The truth is, I haven’t committed to anything that would truly anchor me here, haven’t invested my time in a serious job search, or my money in a permanent place to live. I’ve been running around, meeting people, applying for residencies and fellowships, writing like crazy, but I’ve had one foot out the door ever since I arrived. It’s no way to live in a place, even if you’re pretty sure that place could never really be “home.”

It has been ten days since my visit to the impressive ophthalmologist. Ten days of stinging eye drops four times a day, ten days of no visible improvement in the cyst that has planted itself on my right eye lid. In those ten days, the weather has turned decidedly fall-ish. I’ve gone from sweating on the subway to wrapping myself in a scarf and puffy coat to keep out the chill. And also in those ten days, some unsettling news: the living situation I thought was stable has turned uncertain, bringing with it the chance I might have to move sooner than I thought.

I coasted through the summer without having to make a single important decision. In a way, I sort of feel like that’s been my pattern these last few years. Biding my time in between difficult decisions. But you can only bide your time for so long. Decisions must be made. Life must be answered.

It’s funny the power fear has to sharpen your focus. In pain and discomfort, facing an impending surgical procedure, bracing for news about the status of my apartment, I am suddenly, totally, vulnerable. And in that vulnerability, I’ve done something that’s hard for me. I’ve reached out. I’ve had more meaningful conversations – both on the phone, with friends far away, and in person – in the space of the last week than I’ve had in months. And it has reminded me that though things seem challenging right now, in the grand scheme of life, my current situation isn’t that big of a deal. I am loved and cared for and luckier than most. And whatever happens, whatever decisions life pushes me to make, I’ll make them. And everything will be OK.