On a Sunday evening, three days before the six-month anniversary of my move to New York, I sat in the orchestra section of the Brooks Atkinson Theatre during a performance of the musical Waitress. I was both alone and surrounded by people. I’d wanted to see the show for some time, and as luck would have it, the ticket I’d booked was for the last performance of Sara Bareilles’ Broadway run.

Bareilles’ emotions were palpable as she sang the lead role of Jenna, and they continued to build as the character she gave voice to became progressively trapped in a life she saw no escape from. When she reached the searching ballad “She Used to Be Mine,” the lyrics pierced me, finding their way into an empty space inside my chest and lodging themselves there:

It’s not what I asked for
Sometimes life just slips in through a back door
And carves out a person
And makes you believe it’s all true . . .
And you’re not what I asked for
If I’m honest I know I would give it all back
For a chance to start over
And rewrite an ending or two
For the girl that I knew

I wiped at my eyes furiously, glancing around to see if anyone noticed, and saw that the woman next to me was crying, too.

It’s hard to believe it’s been six months since I got on a plane with most of my belongings contained in three suitcases. Over these last six months, there have been days when time moved at a torturous pace, because of winter storms and the cabin fever resulting from being trapped indoors. But mostly, time has elapsed quickly, a reminder that no matter how you spend your days, the clock keeps ticking.

It wasn’t long after I arrived that I started thinking about leaving. I didn’t realize how much I’d miss the ease of California living. How much I craved sunshine, and the ocean, and fresh produce and the warmth of community. I didn’t appreciate what it meant to live in a place where people know you, where they know your work, where you’re handed opportunities without having to interview or audition or prove yourself. I miss that. I miss being known.

But there’s a reason I decided to go. Maybe it was simply so I could realize what I was giving up. But I don’t think so. I think it was about a search for something I hadn’t been able to find. Something I still haven’t found.

So often in New York, I feel green and inexperienced and not enough. I know this isn’t true. But these feelings are a consequence of starting over, particularly in a city as hard-driving and as competitive as this one. As a friend said recently, “New York calls you out.” And it has. It has called me out on all the ways I hide, all the ways I feel plagued by doubt, all the ways I sabotage myself. It has made these first six months uncomfortable. But it hasn’t necessarily made them bad.

One of the few books I took with me when I moved across the country was Cheryl Strayed’s small but mighty Brave Enough. There’s a quote in it I keep returning to:

The question isn’t whether you should stay or go.

The question is: How would your life be transformed if you chose to love this time with all your intelligence? 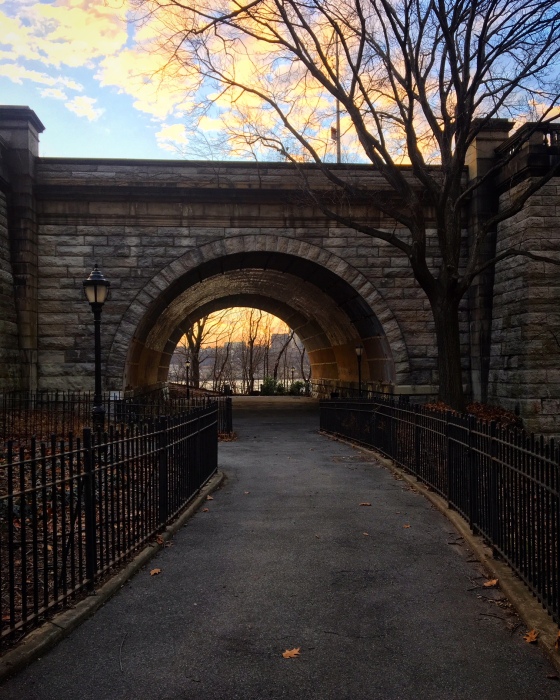 I’m pretty sure Strayed is referring to romantic love here, but I find the quote to have broader application. I read it as: Wherever you are, be all there. Commit. Live in the moment, and love it, with everything you have.

I haven’t done that here. In truth, I’ve spent much of the last five years being anything but present. Running. Jumping on planes. Passing time until the next time I could go away and get out of town. It was grief that made me do this. Grief that kept me swimming like a shark, afraid that if I stopped moving, I’d suffocate.

I’m so tired of running. The transition to life in New York has been hard on me. It has been harder than I ever thought possible. But I don’t want to leave. What’s exciting about this city is the sense of possibility that is everywhere here. For every opportunity that doesn’t pan out, there are so many more things to try. So many more roads to go down. So many more doors to knock on. So many more people to meet.

As I write this, it’s the first day of Spring. Tomorrow, there is yet another snow storm in the forecast. But even still, winter is waning. The days are growing longer. And there is so much that feels possible, waiting just around the corner.